Sweet, bitter or white, hot chocolate is the ultimate hug in a mug. It is warm, luxurious and, most importantly, contains a rather popular stimulant about which you may or may not have heard. Personally, a rich and bitter hot chocolate appeals to my inner desires, so for this recipe pure (100%) cocoa paste seemed in order. Though the recipe includes both milk and sugar – two of three fundamental parts of milk chocolate – pure cocoa helps lift this rendition above the attempts of most cafés. Indeed, insipidity reigns supreme in the world of hot chocolate – time to turn things around.

I don’t care for instant oatmeal – any brand, any flavor.  This one tasted good but I do not like the texture of  instant oatmeal, the oat flakes are too small & turn out mushy no matter how short the cooking time.  My husband thought it was okay but he’s not an oatmeal eater.  However, my mother-in-law liked it very much!  She especially liked that she could add her own sweetener (she’s diabetic).

I very rarely buy cookies.  My family absolutely LOVED these ones!  Our samples were gone in no time.  We used the coupons to buy 2 more boxes.  Seriously, I *rarely* buy cookies & when I do, they last a while because we’re not used to having them in the house.  They’re not so soft that they crumble in the wrapper.  They have a nice crispness & they’re not overly sweet.  My daughters think they’re the best cookies ever.  These cookies come in the perfect size packets for my handbag.  I’m hypoglycemic, so I need to carry small, sweet snacks with me at all times.  These are perfect!

Another thing I don’t buy often – bars.  Like the cookies, these are YUMMY!!  I like them more than the cookies.  They’re not hard & dry like other brands.  These are nice & soft & chewy.  The texture is perfect, the sweetness is perfect.  I keep these in my handbag, too, just in case my blood sugar gets too low.  We didn’t have a coupon for these (we have coupons for the yogurt bars), but we bought more of these anyway – in chocolate chip & in peanut butter.  YUM!!  They are addictive but I have to resist for health reasons!  If I didn’t have hypoglycemia, I’d be eating these all the time.  Like, all day long.  They’re THAT good.

I talk about healthy eating quite a bit on FB & Pinterest.  I’d be a hypocrite if I didn’t mention my concerns about these products that I’m feeding myself & my family.  I KNOW Quaker isn’t claiming these products are health foods but still, I have concerns.

My main concern with major brands is GMOs.  Here is an excerpt from a statement from “Ken, Quaker Consumer Relations”:

So, while the oats aren’t GM, the sugars & oils, etc, very likely are.  Here’s an article about detoxing from GMOs.  Don’t know what GMOs are?  Click here.

Me out in nature.  Well, sort of.  There’s a small woodsy area & creek at the end of our street.  My nephews love it here, they think it’s the best place on the planet.

The older one fell into the creek on his second visit. 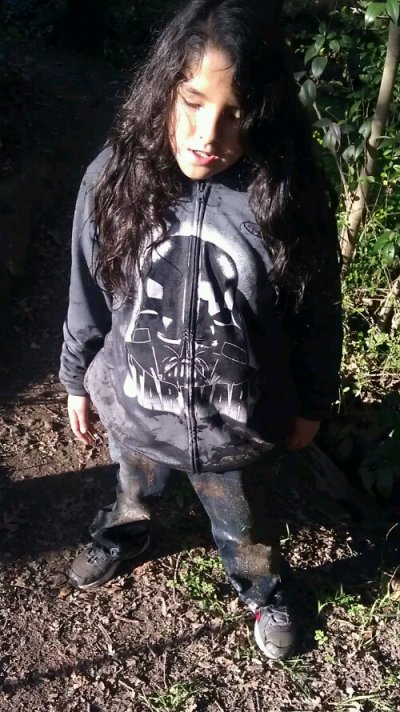 Eating clovers whilst looking for 4-leafed ones is a lot more fun than video games!

Oooh, must try this!

While I work on my “What I Believe” series, I am still going to try to do reviews (that’s why I started this blog, after all).  I have a few things that need reviewing right now, but I want to have Part 3 done & posted by tomorrow afternoon.  We’ll see about that.  I was going to write about the dietary laws but I’m feeling led in a different direction.  After yesterday’s accidental deletion of Part 2, I’m feeling a bit discouraged!  Maybe a few reviews will get me back on the writing track.

I wonder if I should have a separate blog for spiritual things?  I don’t know.  Part of me thinks I should, the other part thinks that my readers can get to know me if I keep everything here.  Do they want to get to know me in that way?  Hmmm…

I haven’t done a recipe review in a long time.  I’ve tried a few new recipes recently, including Martha Stewart’s hamantaschen recipe, so I’ll do one of those today.  With Pesach coming up, there are lots of flourless cake recipes I want to try & some matzoh desserts, too!

***This is part two of my “What I Believe” series & includes some accusations made against me & my family by members of the church we attended for 7 years.  It is not meant to be gossipy or anything like that.

We’ve been accused of being legalistic because we try to follow the biblical commandments of YHVH as given to Moses. Yet, these accusations come from people who claim to follow YHVH/God, Yeshua/Jesus. Whose & what commands do they follow? Why aren’t THEY legalistic but we are?

The Sabbath begins at sundown Friday & ends at sundown Saturday. All YHVH’s days begin at evening.

Genesis 1:5 God called the light Day, and the darkness he called Night. So there was evening, and there was morning, one day.

We don’t work on the Sabbath.  We don’t prepare to work, so that means we don’t put dirty clothes into the washing machine, read work emails, get ready for the next day’s work,etc. We don’t cook or do chores but we do clean up any messes we make. We pray, read & study scripture. We go to service at our messianic synagogue. We play games, go for walks or bike rides & have fun. We rest. We don’t cause others to work, which means we don’t go shopping (or even browsing), we don’t go out to eat.

Exodus 20:9-11 You have six days to labor and do all your work,  but the seventh day is a Shabbat for Adonai your God. On it, you are not to do any kind of work — not you, your son or your daughter, not your male or female slave, not your livestock, and not the foreigner staying with you inside the gates to your property. For in six days, Adonai made heaven and earth, the sea and everything in them; but on the seventh day he rested. This is why Adonai blessed the day, Shabbat, and separated it for himself.

They have said that we are against worship on any day but Saturday. We have NEVER said that. As believers, we worship EVERY DAY!  But the seventh day is the Sabbath. (Italics mine)

END_OF_DOCUMENT_TOKEN_TO_BE_REPLACED I’m still working on Part Two of my “What I Believe” series, so here’s a short video.  Part Two is about the Sabbath.

I’m a BzzAgent & got these items for FREE, in exchange for my opinion.


I wasn’t too sure about this campaign. I don’t buy these sorts of things. I use essential oils, incense & naturally derived sprays to fragrance my home. But for some reason, I wanted to try these!

Wow! I’m so glad I did! I was able to do a couple of test sprays at the supermarket. For the air freshener, I chose Pineapple-Mangosteen.

For the oil diffuser, I chose Fuji Apple-Cardamom.

I wasn’t sure how well the diffuser would scent the room. I’ve used other brands of diffusers in the past & they didn’t scent the room very well at all. But Glade Expressions scents the room wonderfully! My husband said when I walked out of the room, the scent followed me. A plus in my book!

The cashier at the supermarket exclaimed “What great coupons! How’d you get them?” So I explained BzzAgent to her. I signed up a relative, too!

Feedback so far: The scents smell soooooo goooood!! And the coupons are awesome! They’re about half off the regular price.

I will buy these products in the future! 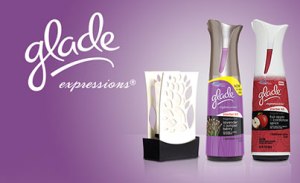 ***This is going to be a series about my spiritual/religious beliefs.

Part one is what I believe & some assumptions christians have made about me & my family & our faith.  Future posts will go into the details of our beliefs & will include scripture.

There has been lots of drama recently with me & my husband and our former church-mates these last couple of weeks. It’s all been on Facebook but lots of people have “heard about us”.  People have emailed & texted us saying that have heard about us leaving the church.  My sister bumped into one of them at the supermarket.  The woman asked if we’ve stopped going to church.  My sister said “yes”.  The woman said “Oh, we heard”.  Why did she ask then?  She then told my sister “You should come to church, I’m there all the time”.  She’s there all the time yet had to ask if we’ve stopped going there.  We were there all the time, too!

Odd thing is, we stopped going to that church 8 months ago!  All of a sudden people are realizing we left?  Did they somehow think we were there all this time? Were they under some sort of spell, seeing us there every week & now someone has snapped their fingers & they can see we are not actually there?  It is so strange to us that they are all suddenly so concerned that we’ve left the church when they’ve had all these months to call, visit, etc to find out why we haven’t been there.

The gossip has reached friends 2500 miles away.  So not only is the drama toward us, others who aren’t involved are being dragged into it, others who had NOTHING TO DO WITH THIS.  I know what the scriptures state about spreading gossip, lies & slander.  This situation is very ungodly.  I mean…gossip.  Seriously?  From supposedly mature christians?  This isn’t supposed to happen.

Here is a summary of our beliefs:

We are “Messianic”. That means we believe Yeshua (aka Jesus) is the Son of YHVH (the LORD, Adonai, God), He lived, suffered, died & resurrected so that we could have salvation. We believe that all the Scriptures – Tanakh (Old Testament) & B’rit Hadashah (New Testament) are true, valid & relevant for today.  We believe that once we confess faith in YHVH & Yeshua, we are Israelites.  We did not convert to Judaism, we don’t claim to be Jews & we definitely don’t claim to be Israelis.  Since the Tanakh is addressed to the Israelites, it is applicable to us.

to do away with; put an end to; annul; make void: to abolish slavery.

adjective
1. having all parts or elements: lacking nothing; whole; entire; full:
a complete set of Mark Twain’s writings.

2. finished; ended; concluded: a complete orbit. (I like this example ~ When an orbit is complete, it doesn’t mean the object has put an end to orbiting or stopped orbiting & never has to orbit again!)

3. having all the required or customary characteristics, skills, or the like; consummate; perfect in kinder quality: a complete scholar.

We believe that “Christians” today are supposed to keep as many of the Torah commands as possible. Yeshua said this in Matthew 5:18-20 ~ Yes indeed! I tell you that until heaven and earth pass away, not so much as a yud or a stroke will pass from the Torah — not until everything that must happen has happened. So whoever disobeys the least of these commandments and teaches others to do so will be called the least in the Kingdom of Heaven. But whoever obeys them and so teaches will be called great in the Kingdom of Heaven.

Obviously, we cannot keep them all because no nation on Earth is ruled by Torah. There are no elders or judges sitting at the city gates, no Sanhedrin, no temple, etc.  Yet, heaven & Earth are still here, so the commandments still stand.

I don’t feel this first part is complete but I don’t want to get too much into it on the first go.  I have looooooads more to write about.  I think it’s best to leave this here & get on with the next entries.