I bought this bug bite salve kit from Bulk Herb Store last month (it was on sale) & finally got around to making it.  It was super easy, really no effort at all!  I made this yesterday so we haven’t got bitten yet.  We’re going camping soon, so that might change.  But…I did make Four Thieves Vinegar insect repellent, which I haven’t used yet, so we might not need the salve.

What you do is, fill a jar (whichever size fits in your slow cooker with the lid on) with the herbs (I used a pint jar).  Then, cover the herbs with olive oil.  I wasn’t sure if the oil was just supposed to cover the herbs or if the oil was supposed to go to the top of the jar.  So I used enough to cover the herbs. Put a small kitchen towel on the bottom of the pot, place the sealed jar on the towel & fill the pot with water up to the bottom of the lid.  Put the slow cooker lid on & set the pot to warm NOT low for 3 days.  I didn’t need to add water to the pot over the 3 days, but you might need to.

When the 3 days are up, turn the slow cooker off & remove the jar.  I used my hands, it wasn’t hot at all, but be careful just in case yours is hot.

Next, strain the oil into a saucepan on the stove.  My herbs came out all at once!  So I really had to press (with the jar) to get the oil out of the herbs. The oil will be slightly greener than it was originally.  And it will smell so delicious!  Like pesto!

Add beeswax (amount varies according the size of the jar you use, I used a pint jar & 1/4 cup beeswax) 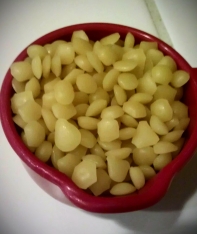 Turn the heat to medium & add the beeswax.  It will melt very quickly.  Turn the heat off & pour the liquid into tins.

The kit came with four lids but I only had enough salve for three.  I suppose if I had fill the jar to the top with olive oil, I would have used all four tins.  I’ll let you know how it works if we get bitten!